on February 24, 2017
A browse through previous concerts by Newbury Chamber Choir is revealing. Its members have contributed their share of Handel and Vivaldi, Mozart and Brahms. But what intrigues its eye-catching less familiar repertoire.

Newbury’s capable, well-tuned choir prides itself on including music undeservingly overlooked. They have engaged with beguiling medieval Play (Opera) of Daniel, reaching back to the 13th century. The early Baroque yielded Carissimi’s oratorio Jonas; and from a generation later the Missa Dolorosa of Venices’s Antonio Caldara (which is also featured on 25th March at St. Lawrence, Eastcote, Middlesex by the Sine Nomine Singers: www.sinenomine.org.uk)

Newbury has shone light on two composers who achieved a kind of ‘first’: introducing sacred concertos by Giovanni Paolo Cima (1570-1622), a Monteverdi contemporary credited with inventing the trio-sonata; and more crucially, the choral work Rappresentatione di Anima, et di Corpo (1600), by the slightly older Emilio de’ Cavalieri (c1550-1602), hailed as inventor of the oratorio. Who hears of these composers today?

We owe it to the ensemble’s highly experienced, versatile conductor, Edward Lambert (whose own compositions have also featured at these concerts), that Newbury Chamber Choir has just presented an evening at St. John the Evangelist Church devoted entirely to the works of a key yet neglected Baroque figure: the Bohemian-born Heinrich Biber (1644-1704), latterly Imperial court Kapellmeister at Salzburg and protege of the Archbishop.

Biber was a violin virtuoso par excellence, and his intensely complex Mystery Sonatas – well worth seeking out - are on a par with, say, Bach’s Chaconne in importance in the repertoire. A violin sonata, in F, formed a bracing centrepiece to this concert: Ellen Bundy displayed with impressive ease the extraordinary dexterity required to master the vital flow and subtle coursing of the fingers, almost like an extended appoggiatura.

To have two full-length choral works by a composer as unfamiliar as Heinrich Ignaz Franz Biber juxtaposed was indeed the rarest of occasions, one to be savoured. It was the final work, Biber’s latish setting of the Requiem Mass in F minor, that made the most powerful impact. One could sense here, one felt, the full flowering of the Baroque; and this was not least thanks to some beautifully shaped solo singing from Cantores Michaelis: choral scholars of Southampton University Choir.

Biber gives the chorus some resplendent music in the Kyries, which made a strong impact at the outset. Edgy violins in the Dies Irae usher in ‘Quantus tremor’, just as a tremendous basses’ outburst is saved for ‘Rex tremendae majestatis’, prefaced by some finely assured choral singing at ‘Quid sum miser?’ The versification of ‘Recordare’ has some affinity with the Stabat Mater, and here the soprano and alto solos excelled, heralding the invasion of the splendid bass soloist, Elliott Titcombe, with ‘Confutatis maledictis’. The choir tenors’ almost surprising attacca at ‘Lacrimosa dies illa’ and the powerful impact of the basses (‘Judicandus homo reus’) underlined the ability of the lower voices, and confirmed all forces’ satisfying command of Biber’s score.

All the solos brought distinction to the Offertory, right through to the repeated choral ‘Quam olim Abrahae’. Its feel is indeed dramatic, calling to mind Monteverdi’s last opera, The Coronation of Poppea. Upper voices shone in the excitable Hosannas, and basses again in the second Agnus Dei, where the underlining trombone added richness to the texture. Indeed the choir and orchestra as a whole brought not just energy and drive, but a wealth of expression, to this thrusting Baroque score. The overall effect of the entire Requiem was immensely satisfying, and the beautifully effected attacca into the ‘Lux Aeterna’ and some bewitching pianissimo singing at the return of the ‘Requiem aeternam’ reinforced the striking impression  made by Edward Lambert’s choral forces, nursed along by his careful coaxing.

It would be good to say that the much earlier work, Biber’s Missa in contrapuncto, showed up the Salzburh composer’s compositional skills equally. Certainly here he uses counterpoint with the assurance of his Renaissance predecessors, canonic writing tending towards fugue being the order of the day. Tinges of chromaticism colour the first and third kyries, and the stilled choir at the ‘incarnatus’ in the Creed bizarrely anticipates the ‘amazed’ choruses in later Italian opera. The chorus, on instruction, pointed each syllable forcefully, arguably too much so, which had a slightly negative effect in a work that cried out for more touches of seamless legato. But it did lend several passages a sense of nobility; the Gloria’s opening, in a sort of semistaccato matched by the orchestra, gained from this slightly didactic precision.

The feel as a whole was of a sort of primitive Baroque, lacking the touching ‘affect’ so crucial to, say, Lully or Purcell. The ‘Quoniam’ perked up with brass encouragement, and the close positively pirouetted, with cellos and basses dancing too: a charming effect. A strikingly bold ‘Crucifixus’ underlined the sensation of undeveloped Baroque, such as one associates with Bach’s musical family predecessors. Interestingly, the Sanctus starts mysteriously rather than boldly, an effect the choir achieved splendidly; by now, a legato element had crept in, while the Agnus Dei had a delightful plangency, not least thanks to the altos, after a Benedictus enhanced by a lively sopranos’ lead.

It was good to see a concert as courageous as this inspired a respectable audience. Biber emerged (mostly) with honours: a choir which takes risks such as this patently deserves our admiration and applause. 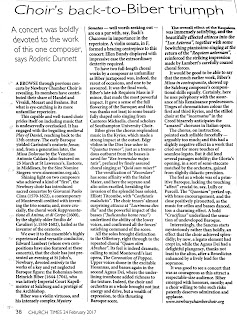