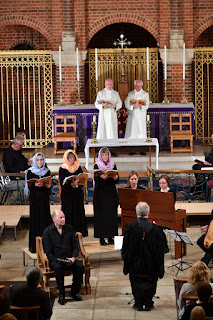 First performance on 8 April 2017 of The Visit to the Sepulchre. Newbury Chamber Choir in St John's Church, Newbury. The Three Marys Lucy Fitt, (soprano) Gill Careless (soprano) Karen Coffin (mezzo soprano) The Two Angels Gordon Fry (tenor) Richard Foster (tenor) The Gardener Christopher Little (bass) Narrator Don Crerar Susan Holmes (chamber organ) Andrew Kerr (string continuo) Edward Lambert (conductor) This work is an adaptation for a contemporary choral performance of the musical drama Visitatio Sepulchri which survives in the manuscript known as the Fleury Playbook. (The town of Fleury is now known as St-Benoit-sur-Loire). The music is a free interpretation of the original plainsong melodies.   There is a legend of the Three Marys, having been witnesses of Christ's resurrection, escaping to France to avoid persecution. According to another legend, they were daughters of St Anne (the mother of Mary, mother of Jesus) by different husbands. Certainly, there grew many cults around them, their visit to Jesus' tomb and, subsequently, around the Holy Shroud as well. The dialogue between the Three Marys and the Angels which took place at the Sepulchre became the centre-piece of a liturgical ceremony from about the tenth century; this in turn grew into a dramatic presentation of the Easter story, and eventually gave rise to the genre of the medieval Mystery plays that spilled out onto the streets in performances by the larger community. The current version aspires to be a part of that tradition. 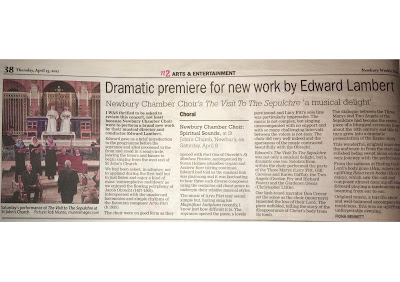