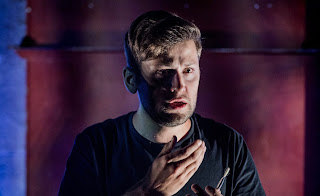 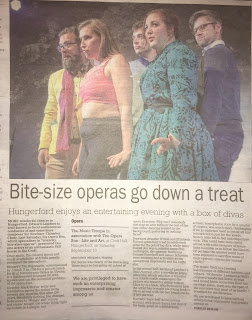 I came across Poe’s The Oval Portrait in 2013 when I needed to complete a programme of chamber opera: the story is concise and simply told, written in prose that sounds very musical. The story had a surreal quality which encapsulates the life and art dilemma in a way which would be impossible with a more down-to-earth scenario. It wouldn’t be a true opera in the normal sense, with dialogue between characters, for example; but it’s a story crying out to be sung.

The Visitor begins by telling us how he stayed in a remote castle (think Transylvania) and in his turret-room he becomes disconcerted to feel he is being watched. The culprit turns out to be merely the portrait of a young woman, but one which is so full of life that she appears to be real.  For an insight into the portrait, he turns to a book which he sees beside him, and the rest of the tale quotes the words that he reads. Since I had five singers available, I set the visitor as a solo baritone, and the text of the book for the remaining four voices and since their words needed to be clearly understood, much of their delivery is in the form of choral recitation.

They explain that the young woman’s husband was an artist who already had ‘a bride in his art’. The piece changes colour when he starts to paint her portrait: in a never-ceasing frenzy the portrait comes alive even as the bride withers away out of sheer exhaustion. I chose simple chords that are hammered home and a driving pulse to depict this ‘fervid and burning’ activity, and I remember writing it in rather the same way. As the artist finishes the work he exclaims “This is indeed Life itself!” - whereupon he discovers his bride has died.

This is where Poe’s story ends. But I added a little surprise that the Book has in store for the Visitor.
compositions operas