A Wedding in Florence

on December 21, 2017
I've recently finished a new arrangement of the 1539 Medici Wedding Music. Quite aside from the fact that I've augmented the original pieces with my own Songs of a Florentine Apollo, this is wonderful music. Usually described by historians as a collection of 'madrigals', it adds up to much more than that: a sequence of characterful songs and choruses which foreshadow the advent of opera.

I look forward to the first complete performance of my adaptation in April next year and have included the following notes as an introduction to the score. 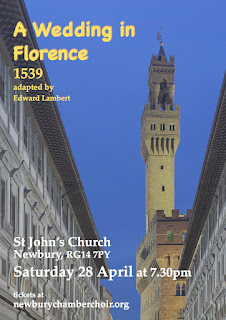 By 1539, the young Cosimo de’Medici (1519-1574) had already succeeded in restoring the power of the Medici dynasty and with it, the fortunes of Florence. The festivities for his marriage were designed to reinforce Cosimo’s pre-eminence in Italian politics which he had achieved through his bond with the Holy Roman Emperor, Charles V, the ruler of Spain. Cosimo’s fortunate choice of wife was the seventeen year-old Eleonora di Toledo (1522-1562), daughter of the Spanish viceroy of Naples. But apart from the huge political significance of the match, he was in love with his bride, having rejected her older sister, and the marriage turned out to be a happy one. The many sons and daughters of the union not only ensured the successsion of the Medici family which went on to rule Tuscany for another 200 years, but also connected it to nobility throughout Italy and beyond. This new golden era in the history of Florence began with the wedding festivities of 1539...

The festivities might have faded into historical obscurity were it not for the pen of Pier Francesco Giambullari (1495-1555) who was commissioned by the Medici family to send a report to Charles V through the Medici’s ambassador at his court. Giambullari was a member of the Florentine intellectual establishment and his account constitutes a literary and historical document in its own right. It is immensely detailed, describing every nuance of artistic decor and costume. It started a trend that was to become common thereafter, namely the meticulous recording of ceremonies connected to the grand events of the times.

In Giambullari's account there is no mention of any religious ceremony. The celebrations began when the couple arrived at the gates of Florence where a welcoming arch had been erected. On either side of this stood musicians and singers performing Ingredere felicissimis. An 8-part ceremonial motet, this is municipal music at its grandest and most eloquent: as the couple walked around and through the archway, they would have heard different voices and instruments standing out from the texture, much as the arch itself was lavishly decorated with reliefs.

A few days later was held the most important of the festivities: the wedding banquet, with invited nobles from Florence and abroad. This was a political statement, designed to impress the spectators with the strength of Medici power and the size of its wealth. But the cabaret that accompanied it was also a wedding present for the seventeen year old, fun loving Eleonora: what better way to entertain a new bride than to present a variety show with, as its theme, portraits of the country that she would now rule over?

After an initial 9-part Hymn to Hymen (the god of marriage, moved to the end of this sequence), there stepped forward in turn Flora (as Florence) Pisa, Volterra, Arezzo, Cordona, and Pistoia, all dancing, acting and singing. These cities were under Medici control (though it was not until 1569 that Cosimo would be styled Duke of Tuscany). In their various ways, they pay homage to the newly married couple. The fly in the ointment was Pistoia, which had recovered from civil unrest when the poetry for the banquet was written but by the time of the performance had succumbed to rebellion again. The last of the tributes was from Rome, called the Tiber out of political sensitivity, and as if to underline the fact that these two cities reflected each other’s glory (the Medicis had a few popes to their name), this is set as an echo chorus, a play on the word ecco (here).

Another wedding event, on 9th July, was the performance of a play, a commedia entitled Il Commodo (A Happy Arrangement) by Antonio Landi. Giambullari reproduces the entire script in his letter. The significance of this performance is that it was punctuated by seven musical interludes or intermedii which delineate times of the day, through the appearance of Dawn, Shepherds, Mermaids, Huntresses, and Night. Noon is personified by Silenus, a character in Virgil, found sleeping in his cave at midday. The entertainment was brought to a rousing finale by Bacchus, a celebration of wine and merrymaking.

A Wedding in Florence presents the complete music from 1539 - but mixes the original sequence of events by inserting the intermedi between items for the wedding banquet.

Finally, the first singer to appear at the wedding banquet was the figure of Apollo. He acted as Master of Ceremonies, introducing each scene with poetic recitations. Rather long-winded, as befits perhaps his godly status, he refers to the symbolism of the costumes and the decor with reference to the places they represent, explaining it all to his audience in flowery language. All his poetry is recorded by Giambullari, but no music has survived: this version sets this poetry, much abridged, for solo baritone to form short, new intermezzi of a contrasting kind which are intended to pay homage to those creators, performers and spectators in Tuscany 1539 from the perspective, as it were, of the subsequent story of Italian opera. I have called these items Songs for a Florentine Apollo.